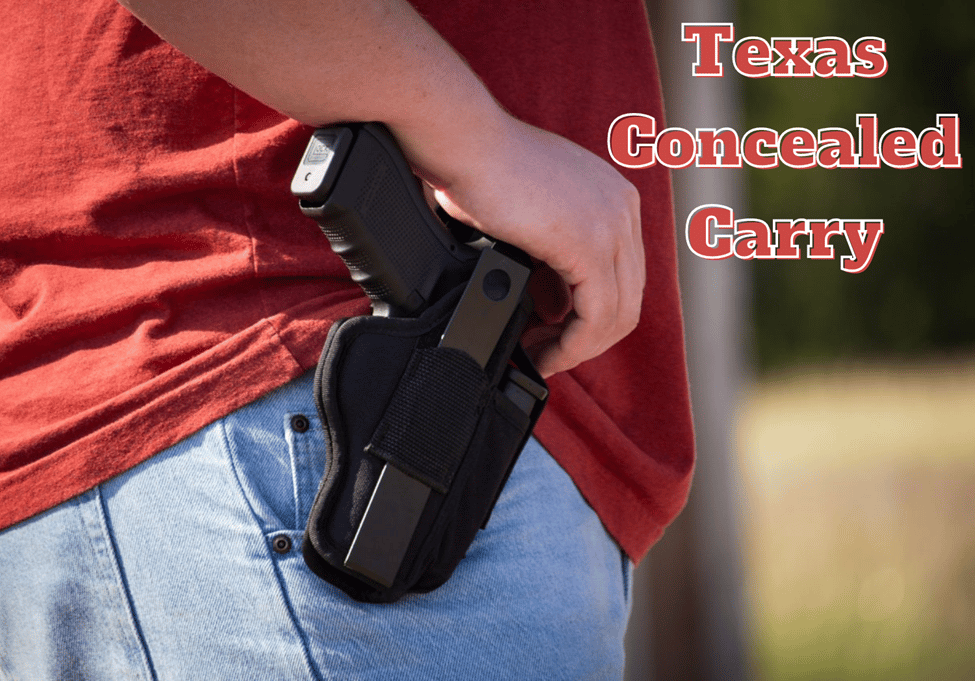 Carrying a handgun (often a pistol) under one’s clothing is known as “concealed carry” Texas Concealed Carry. It is legal on both public and private land. Whether you have a permit or not, concealed handgun carry for self-defense is allowed in many States throughout in the United States.

Concealed carry is widely accepted in Texas, a state with the nation’s laxest gun regulations. We can feel your enthusiasm but wait a minute. A concealed-carry handgun comes with specific responsibilities.

Like just a few other states, Texas is a “shall-issue” state. It implies that if an applicant meets specific requirements, the DPS will grant a license to conceal carry a handgun.

To be qualified for concealed carry, one must meet the following requirements:

By law in Texas, the local Department of Public Safety must undertake an additional background check to validate the accuracy of the applicant’s application.

Where Can You Carry It?

Handguns aren’t only for keeping in your safe or shooting range. You may also conceal carry in select spots in Texas.

They are as follows:

While specific public spaces may permit concealed carry, some buildings and properties in the region may not. Therefore, planning your route and avoiding particular areas is essential to avoid legal trouble.

Where Can’t You Carry It?

Though there are many locations where you may conceal carry, these are the majority of the sites in Texas where concealed carry is not permitted.

They are as follows:

Though concealed carry is prohibited in certain regions, exceptional exceptions may be granted in specific circumstances, particularly regarding security.

Permission must always be obtained from the owner or the management of that particular place and institution.

Do I Need An LTC To Conceal Carry?

Texans above 21 will no longer need a concealed carry license as of September 20, 2021. But, it is strongly suggested that you go ahead and get your LTC.

There are several advantages since having an LTC puts you on all documents. Because all of your background information is there, any weapon transaction or purchase would be pretty straightforward. That is just one of the many advantages of owning an LTC. Look no further if you want to get your LTC.

Jacob Kathleen
I really learned a lot from this course. Did it in a week at my house on my tablet and was very pleased. Now just waiting for Texas DPS to issue my License to Carry.

Natalie Anthonye
Very simple to understand. Do it at your own pace. I did most of it on my phone. Had a few questions and they responded very quickly. Great service.

Slewna Henry
This is the best thing ever to take the class online!! It was super easy to complete!! If you have ever wanted to get your LTC this is the way to go!

Carlos Pipery
Very informative course. PowerPoint are never fun but the information is good knowledge to have. Definitely recommend to anyone looking to get their License to Carry Texas.

Scotty Liptzin
If you’re like me and have about a million things going on, the online LTC is the way to go. The instructor is not some mono-toned robot trying to teach you pew-pew tactics, this guy knows his stuff and how to articulate it. He’s clear/concise and helps you understand and bring things to a level to help push you along through what you need to know, vs pulling you through. Great class, I’ve recommended this to many of my friends already.

Astelle Esther
I have been through several concealed weapons classes for other states and this is by far the best. Gary is very well educated on the topic of fire arm safety and legality. Over all I thought I was adequately educated on gun laws and carry laws, but because of this class I walked away better prepared better educated!

Hattie Cambron
The class was well organized and the atmosphere that the instructor created made for a really fun yet informative time. He debunked a lot of myths that gun owners tend to have who have not ever gotten the proper training when it comes to the law. I would definitely recommend to anyone who hasn’t taken the class or even if you are just interested in buying a gun.

Adeline Melody
One of the most effective, informative, and useful classes I have ever taken, and I spent 20 years in the Marines. Vets, active duty, or anyone who has taken a mandatory class: imagine spending over 1/2 a day in a classroom and NOBODY is bored. Gary does an outstanding presentation and is extremely professional while keeping the class enjoyable. He will take you through real life type of scenarios to prepare you for not what is coming but for things that might be coming. This family ran business is who you want to take your class with. HIGHLY recommend these folks to anyone wanting to get a concealed carry.

Gabriela Hoffemann
Class helped understand material by using scenarios both made up and actual things that I have seen in the news. Easy to enjoy the class and not “glaze “over in boredom. Highly recommended for all who want to understand Oklahoma carry laws.

Pedro Luciano
Great class Gary! Not only did Gary engage the classroom and make us a part of the learning process, but he also patiently took on scenarios and questions willingly. With a class so long and so detailed, it’s important to keep things light while relaying the gravity of the content. I recommend this class to any new shooters and new handgun carriers.
Google rating score: 5 of 5,
based on 33 reviews